Discover Manila’s lovely and vibrant city. Find out the best places to visit, the local delicacies you should try, and the different modes of transportation when visiting the metro.

The Philippines’ capital city, Manila, is often the jump-off point to the country’s incredible beaches, stunning islands, and unique natural wonders. However, there are many tourist spots to visit in Manila alone! It’s a beautiful city full of surprises and amazing things to try!

For first time visitors, Manila may seem overwhelming to explore. But it’s quite manageable once you have a well-planned travel itinerary.

You’re bound to fall in love with Manila thanks to its interesting tourist spots, foodie destinations, and fun activities. Read on to find out the best things to do and places to see in the bustling capital of the Philippines and its neighboring cities: 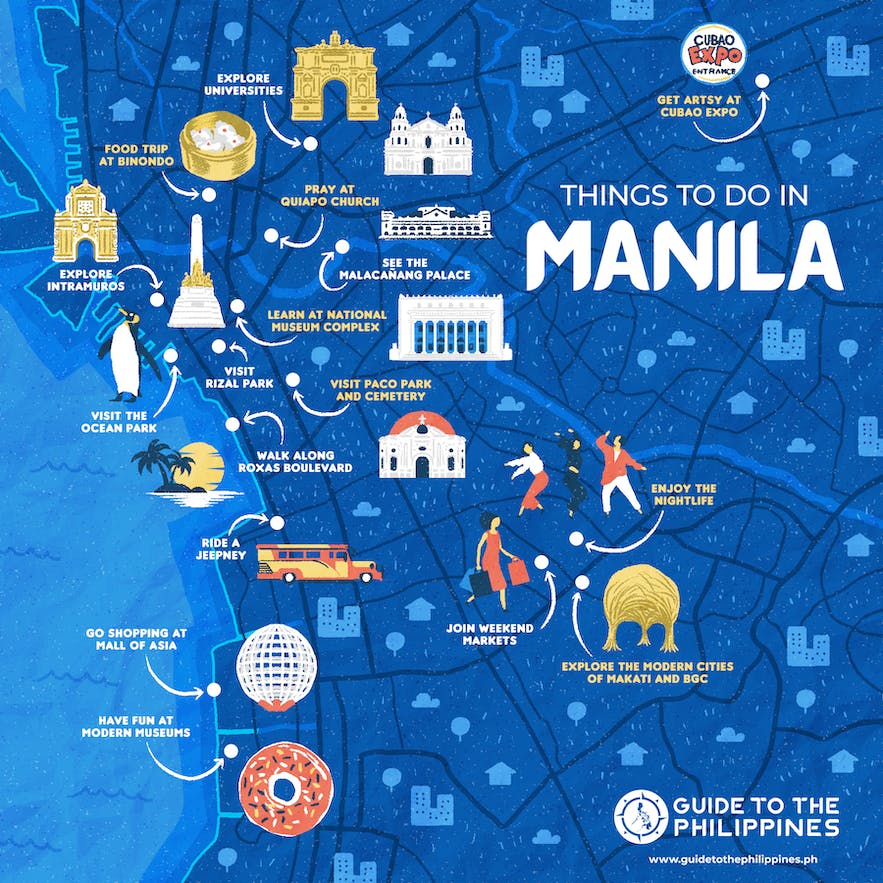 1. Travel Back in Time at Intramuros

Intramuros, known as the “Walled City,” is the oldest district and historic core of Manila. Intramuros tours are a must-try for history buffs because it’s packed with trips to interesting attractions.

This iconic Manila landmark is actually a walled area within the modern city. It was the seat of government and political power when the Philippines was still under the Spanish rule.

Intramuros is Manila’s only district where travelers can see complete architectural remnants of the Spanish Era.  A day trip in Intramuros is enough for you to go sightseeing in this well-preserved historical attraction.

Wander along paved roads and visit historical monuments and sculptures. You can even join a bambike tour (bamboo bike), or by riding a kalesa or horse-drawn carriage experience. Here are some of the must-visit attractions in Intramuros.

This is one of the country’s oldest Hispanic stone castles. In 1951, Fort Santiago became a national historical monument and a well-kept destination frequently visited by travelers. You can join a sightseeing and walking trip to explore this attraction.

This is the religious center of the Archdiocese of Manila. It was the location of the Spanish Archbishop of Manila, who had jurisdiction over the whole archipelago during the Spanish colonial period. You can visit this tourist spot any time of day, which is why a bambike night experience can also be a fulfilling thing to do.

It’s one of the Philippines’ four Baroque Churches, registered as a UNESCO World Heritage Site. Many locals visit here daily to pray and contemplate.

It’s one of two significant squares in Intramuros. The plaza is regarded as the area’s center of trade during the colonial past.

It’s a rebuilding of a 19th-century Spanish colonial house that dates back to 1981. Each chamber at Casa Manila is furnished in ancient style with wooden furniture, ornaments, and works of art. It’s a relevant tourist spot often included in a walking tour of Manila.

This was built from a circular tower that was initially intended to protect Manila during the Spanish times. This spot is where you can revel in nature, surrounded by colorful flowers and tiny trees.

This building houses the Kaisa-Angelo King Heritage Center, a museum that documents the history, lives, and contributions of Chinese ethnicity in Philippine life and history.

Located in the heart of Manila is Rizal Park, a landmark full of historical significance. The park is a homage to the Philippine national hero, Jose Rizal.

He was a doctor and novelist who was shot by firing squad at this site on December 30, 1896, on charges of fostering local rebellion against the Spanish government.

The park is split into three areas, starting with the 16-hectare Agrifina Circle adjacent to Taft Avenue. It’s where the Department of Tourism and the National Museum of Anthropology are situated.

Then there’s the northeastern segment; followed by the 22-hectare park extending down to Roxas Boulevard. Lastly, the central section finishing at the southwestern part contains Burnham Green. Join a Rizal Park tour with Intramuros to get the full experience of this local favorite destination.

All are within the same building complex and is made up of permanent collections representing the various facets of art, culture, and history of the country. Joining a National Museum tour will take you around the best of the museums in the area.

The collection here contains both classical and contemporary Filipino paintings and sculptures. The famous paintings by the Philippine revolutionary artist Juan Luna, including The Spoliarium, are a must-see.

It features collections of artifacts of Anthropology and Archaeology. You can also have a look at the old Philippine script called “Baybayin,” as well as collecting cultural memories from native people throughout the nation.

This museum presents the rich biodiversity of the country, including Lolong’s skeleton, which used to be the world’s largest caught crocodile and placed in captivity. Another highlight is The Tree of Life, a glass elevator and a canopy-inspired roof.

It contains astronomic displays of celestial bodies and their real-life projections. They also offer displays, presentations, and demonstrations for travelers who would like to have a world-wide planetarium experience.

7 effective ways you can upgrade your mindset:

Tips To keeps your legs healthy

The 2020 Gaming PC Builds of the Month